As I finish up some high priority tasks I think about the old oscilloscope I am fixing.  I hope to spend some time working on it today.  It is one of many interesting and fun jobs I get to do at the museum.

Since the beginning of the year I have been quite involved with old oscilloscopes at the museum and I confess it has been a guilty pleasure of mine.  A guilty pleasure because I have wanted to restore an old oscilloscope for a very long time.  Far longer than I have been working at the museum and this old desire makes me forget I have legitimate reasons for restoring old scopes here and so brief twinges of guilt come to me and I have to remind myself that what I am doing is OK. 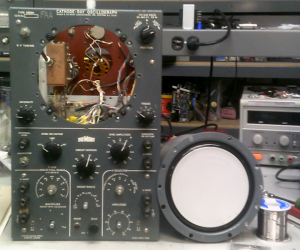 The oscilloscope tube has been removed so I can get access to parts inside the scope  I need to change out.

Old scopes don’t seem to have much to do with vintage computers at first but if  you think about them a bit you see that spending time on old oscilloscopes in a computer museum is appropriate.  Oscilloscopes are the original visual output device for electronic computers  and computers as we know them could never have been built without oscilloscopes.  Oscilloscopes have been an essential tool for seeing what happens inside electronic circuits since the electronic age began.  Without being able to see inside of and understand how electronic circuits work, computers as we know them would never have been built and compared to where we are now the highly technically advanced world we live in would resemble a stone age had they never been invented at all.

The cathode ray tube used in oscilloscopes was invented in 1897 by Karl Ferdinand Braun.  The A. C. Cosser company first started selling oscilloscopes in 1932.  The scope I am working on now and which I show was made in the 1950’s.

Not everyone is interested in old oscilloscopes and I have never seen an ‘I  Love My Old Scope‘   bumper sticker on a car anywhere but I am not alone in my passion.  Several videos have been posted on You Tube showing people repairing old oscilloscopes.  Some of us apparently like old oscilloscopes the way most dogs like a thrown ball and I suspect seeing a few working oscilloscopes can make a visit to our museum more memorable.  My guilt is shared by the old scope video makers.  Their guilt usually makes them come up with a plausible explanation of why they are doing what they are doing.  Just doing it does not seem to be OK but it should.

I have watched a couple of the You Tube videos recently which confirmed some facts I also discovered in my own journey into the world of oscilloscope repair.  I would have benefited by watching some of these videos in the beginning of my journey and will relate what I have learned from them and in my own activity in the future.

One video in particular had a rather humorous moment.  When any piece of electronic equipment is first powered up and nothing bad happens the equipment is said to have passed the ‘smoke test’ because nothing burned up and none of the vital smoke inside of the electronic parts so necessary for correct equipment operation is let out.  The narrator of the video had a thick east coast accent further colored by the crackling voice acquired from years of cigarette smoking.  The narrator powered up his oscilloscope and announced his scope ‘has passed the smoke test‘.  As soon as the narrator said this he then had an intense coughing fit too authentic to possibly have been staged.  When he was done coughing the narrator then said ‘which is more than you can say about me‘.

The smoke test is performed after certain parts inside the oscilloscope have been changed out and replaced with new parts.  I have discovered the condition of a scope restoration candidate varies depending on how the oscilloscope has been stored (temperature and humidity) and on the quality of components used.  Scopes varied in quality and capability and this also affects how well they survive the years.

The external appearance of an old scope my be very good but if the scope has aged in an unfriendly environment many components inside will have to be replaced before a smoke test should be done.  An un-restored scope may power up and appear to work fine but I have learned such scopes will fail components very quickly and then stop working.  I have learned that the statement ‘scope powers up’ in eBay ads does not tell the whole story because even if the scope works some components are old and ready to fail making the scope unreliable.

The particular scope I show in this post will be used to display a reproduction of what is considered to be the first video game ever, ‘Tennis for Two’ and has been selected because I believe this is the same model of oscilloscope used to display the original ‘Tennis for Two’ game way back in 1958 or a model very close to it.  I will be describing what I have been doing to restore this scope and the general steps of what needs to be done to restore old oscilloscopes to working condition in a future post.