On my to-do list has been the task of eliminating jittery text on our TRS-80 model 1 video monitor displayed in the second floor vintage collection of personal computers. The display show a,

prompt as it waits for user input. Our problem is that the prompt rapidly vibrates back and forth making the prompt nearly illegible besides being simply annoying.  the monitor acts like it has been drinking massive amounts of coffee and is on a serious caffeine buzz.

The screen vibrates because interference produced by a TV used as a monitor in an Atari 400 exhibit placed directly behind the TRS-80 video monitor is turned on. Turning off this Atari 400 exhibit monitor makes the TRS-80 display jitter vanish. The Atari and TRS-80 exhibits are back to back from each other in separate rows of our personal computer display.  They are separated by enough distance that signal interference should not be a problem.

We had discovered that a bare aluminum plate (made for a rack mount enclosure cover) about a tenth of an inch thick, totally stopped the jittery text when placed several inches behind the TRS-80 model 1 video monitor. The plate needed to be in between the TRS-80 display and the interfering monitor and placed in exactly the right place to be effective.

The aluminum plate solution suggested that lining the inside of the TRS-80 video monitor cover with copper foil and tape should also eliminate the jitter problem.  I attempted to do this both with and without a ground lead to the added copper foil shielding. Both my attempts were a miserable failure. The foil tape has conductive adhesive between layers but apparently the resistance between sections was still too high to allow sufficient eddy currents to form which would stop the magnetic field from penetrating into the video monitor electronics. That is my supposition and the story I was telling myself but before attempting to improve the shielding I decided to find out more about the TRS-80 display.

It turns out that the TRS -80 model is actually a modified RCA TV made in 1977. I found a picture of the particular model. 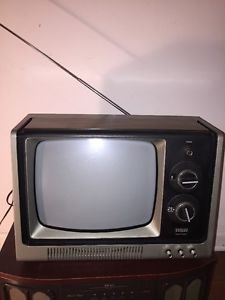 Comparing  this with a TRS-80 Model I video monitor the connection is obvious. 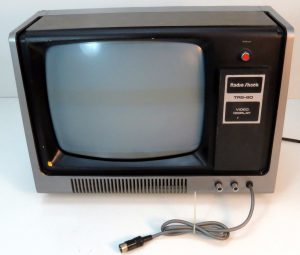 The tuner from the original TV set was removed in the conversion. A circuit board that buffers the video signal from the TRS-80 was put in its place. There is a connector for the tuner on the main TV circuit board and the replacement board simply plugs into this location.

Having seen the insides of enough old TVs, tuner sections were always wrapped in sheet metal to prevent interference. However, this precaution (and necessity) was not observed when replacing the tuner with the TRS – 80 video display custom circuit board. It appears no consideration was given to making this circuit board noise immune. The typical things I know which should be done to make a noise immune circuit board were not done.

I could modify the circuit board so the problem pretty much goes away but I need schematics to do that. Currently we do not have any. I would adjust impedances so the relatively weak interference signal is effectively shunted to ground. I would essentially be finishing an unfinished job from 1977.  An alternative would be to mount the aluminum plate solution permanently and document why it is there for visitors.

Upon sharing my findings with the museum staff, it was decided I should work with Aaron Alcorn and implement the aluminum plate solution. I met with Aaron at our second floor exhibit. I explained that the problem was dependent on height and that lifting the TRS-80 display off its base would make the problem go away. The TRS-80 display had been sitting on a plastic base to elevate it a few inches above the TRS-80 keyboard for easy viewing. Aaron immediately lifted the display and removed the elevating platform. This had not been tried before. The problem immediately went away.  Aaron solved the problem in ten seconds.

It turns out the elevating platform was not all plastic. On its top was a thin layer of steel sheet metal. This sheet metal had been coupling interference into the video display. I think my supposition that the TV to TRS-80 computer monitor conversion had not been fully worked out is still correct but it is also true that placing a TRS-80 monitor in close proximity to another monitor on a steel table was not a typically anticipated operating environment for a TRS-80 computer monitor. The TRS-80 had been intended to be used as a home computer all by itself.

In a karmic twist to this story the TRS-80 model 1 was discontinued because it could never be made to pass FCC RF emission standards. About 250,000 Model 1 systems were produced before it had to be discontinued, five times the original sales target.

The TRS – 80 was an antisocial computer not designed to be used around other computers. It was electrically noisy itself yet also hypocritically overly sensitive to electronic noise from other computer monitors. It was however a very early personal computer and exposed many people to computing for the first time. That is its particular historical significance. I remember it originally used large 8 inch floppy disks in its original floppy drive. As smaller 5 ¼ inch floppies had been introduced in 1976 I found that strange, but I suspect at the time it was the cheaper way to go.

It has been said that the TRS-80 computer did everything ‘OK’ but nothing really really great. It appears that the particular video monitor design issue we discovered supports this view.  But while it may have been flawed, the TRS-80 was also affordable and brought the joy of computing to many for the first time.