Our first floor ‘Tennis for Two’ exhibit has a new scope.  Not really new though because chronologically it is lots older than the scope we were using.  We had been using a Tektronix 465 scope which dates from no earlier than 1972.  I remember this oscilloscope model well as I had one exactly like it on my bench at a previous job as ‘my scope’.  The Tektronix 465 which had been displaying Tennis for Two was made at least 14 years after Tennis For Two had been invented.  Not an ideal situation for a display certainly, but a lot better than no oscilloscope at all which was our alternative.  It took a while to acquire and restore a period appropriate scope.

I wanted to use the same model oscilloscope which had displayed Tennis for Two when it made its debut at Brookhaven National Labs back in 1958 but which scope was it exactly?  All I had to go on was this photograph.

The Tennis for Two oscilloscope is on the left side of the instrument stage.  This next photo shows exactly where.  This is actually two photographs photo-shopped together and the scope image detail portion was not photographed in 1958.

Enlarging a photo does not produce the detail shown above.  The original photo is black and white and the enlargement is in color.  Obviously two photos were combined.  Beyond the obvious in the original ‘Blade Runner‘ movie Agent Deckard used a device which allowed him to zoom in on a photograph without loss of picture quality no matter what the magnification. 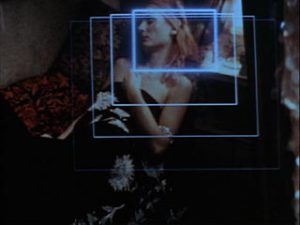 In real life that is simply not possible.  In real life the ‘replicant’ from the Blade Runner movie would have lived another day safe from Dekard for this is what you get upon enlargement of our scope in the Tennis for Two photo.  Loss of detail. 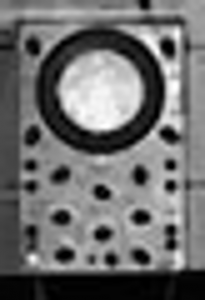 The photo is too fuzzy to make out the white DuMont label just below the display screen in the photo center or a model number.  You can’t even tell where these labels are.  I had to look at the photos of countless old scopes to make a match.  It turned out the diamond pattern of the central knobs below the screen is very distinctive and only DuMont scopes of Dumont ‘304’ model type have that pattern.  Upon identifying the type of scope it was I was able to find one on E-Bay and restore it.  After physically acquiring the oscilloscope certain features in my fuzzy photograph such as the white DuMont Label made sense.  Without a real scope to compare it to these features would have remained a mystery.

Restoration involved replacing almost every capacitor in the scope which could have age related issues before I turned it on.  That is not all but most of them.  Minor troubleshooting then was able to get the scope to work.  The vertical Amplifier had a bad connection on a calibration switch which would not let the vertical amplifier signal pass.  As we don’t need to use the calibration switch I simply bypassed the connection.  If we were to ever calibrate this oscilloscope we would not use the internal calibration signal and would provide an external calibration signal anyway. 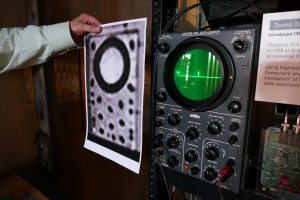 Here is the final result with the enlarged photograph I pasted on my office wall while I researched scope pictures.  The shapes on some of the knobs are different but that is OK.  DuMont mixed round knobs with pointed knobs of the ‘crows feet’ variety frequently.  The scope we are using now and which I show here is an enhanced ‘304’ type called a DuMont 9559 and has options for doing RF measurements.  I also acquired a plain Jane DuMont ‘304’ which has all crows feet type knobs.  Physically the front panels are identical otherwise.

What matters most is not that the knobs absolutely match but that we now display Tennis for Two on a period appropriate oscilloscope.  The scope I restored was in better overall condition between the two I had acquired and I suspect Brookhaven used top of the line models in their research.  We really can’t know what the exact model used was so the Dumont 9559 is an appropriate choice.