We have been running the CDC 6500 for about a year, with only half of its memory. There are 170 Core Memory Modules in the machine, and so far I have declared about 20 of them as being bad. Some it might be possible to tune into working, but some are just dead.

The plan has been to design a replacement module when the time came to get the rest of the memory working, and it seems that time is now. A couple of weeks ago, I spent some Quality Time examining the Peripheral Processsor memory in Chassis 1: 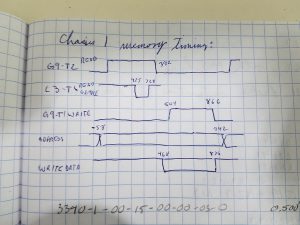 Each cycle lasts about 1 micro-second and includes both a read portion, and a write portion, because reading core is a destructive process, and the data needs to be re-written. The read and write controls are each about 400 nano-seconds, the sense amplifiers look at the read data for about 100nS, and write data is available for the whole period of the write signal, so this is pretty easy with modern components.

I chose to use two 8k by 8bit static rams, and only use half of the space. Timing was produced with some gates, and a delay line.

It took a few days to come up with enough of a schematic to start layout. Here is a picture of the first page of the schematic on the left screen, and the layout with some parts still to be moved onto the board, on the right screen: 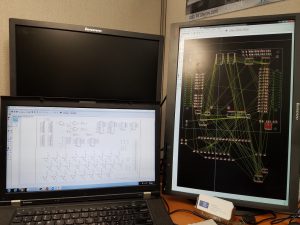 The yellow lines indicate connections that haven’t been made yet. It took a few days, but then: 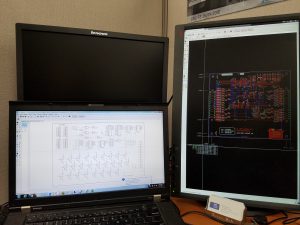 Red lines represent things and wires on the top of the board, whereas blue lines are on the bottom of the board. I didn’t display the two inner planes which hold power and ground. All the yellow lines are gone because I have created the traces to connect all the components.

I sent the board out to be built, ordered all the parts, and went on vacation while everything made it to the Museum. When I got back, I had work to do: 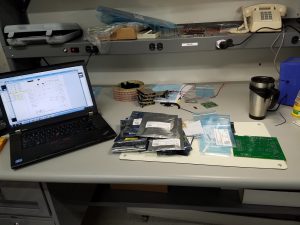 I have the parts, and the board ready to assemble, along with a free program on the laptop, called VisualPlace, which sorts all the parts, and shows me where they go. The red dots on the image of the board are pointing to where I should put the SRAM chips. Several hours later: 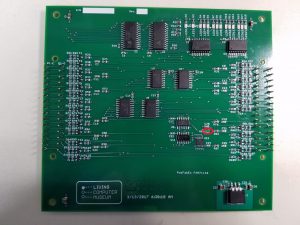 I discovered a couple of problems, the first of which is circled in red, and that is I forgot to order one part. The second is that somehow, the connector on the  right ended up 0.050″ too narrow:

This is why we build Prototypes! The good thing is that I can still plug it in and learn more about how it is supposed to work, and the other mistakes I made. Here is a picture of the prototype mounted on extenders in chassis 12: 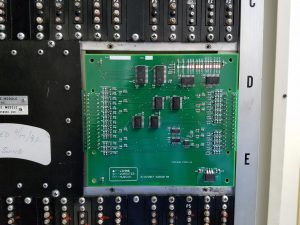 You can see 12 LED’s, in the upper right corner, lit as the addresses go to every module all the time. This being chassis 12, the other two LED’s aren’t lit because we aren’t using the upper half of memory yet. The missing part should arrive in an hour or so, but for now here is a picture of how the new module might look next to an original module: 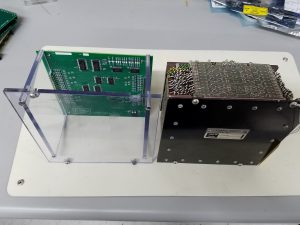