In this series of articles I’ll go into the Alto in detail — the low-level hardware implementation and microcode, the software and languages and ideas that this hardware made possible, and the environment at Xerox PARC where the Alto was designed and used.  But before we dive down to the bedrock, let’s start with a bit of background.

In the early 1970s, Alan Kay, a computer scientist at PARC, had a vision of a personal portable computer that he called the Dynabook.  In many ways, Dynabook was similar to modern laptops or tablets – it weighed under two pounds, contained a keyboard, display, and pointing device, and had a tablet form-factor.  The goal of the Dynabook was to be “a personal computer for children of all ages,” a portable educational computer.  Kay’s vision wasn’t technically feasible at the time – but the vision behind it was a driving force for the research he lead both during his tenure at PARC and beyond.

In 1972 Kay proposed the idea of building a small personal computer (which he termed “KiddiComp”) to allow experimenting with the kinds of ideas he envisioned for the future Dynabook – in particular user interface design, education and computer-literacy for children.  This was centered around a programming language he called “Smalltalk” which made use of unique hardware for the time:  A high-resolution bitmapped display with a pointing device.  Unfortunately, when Dr. Kay submitted a proposal to the management at PARC to get a few KiddiComp systems built, he was denied funding.

Enter Butler Lampson and Chuck Thacker.  When PARC’s request for the purchase of a DEC PDP-10 for their research work was turned down in 1971 these two brilliant engineers figured they could design and build their own PDP-10 within eighteen months.  And they did – MAXC (pronounced “Max”) was a microcoded recreation of the PDP-10 architecture using semiconductor memory rather than core, and a pair of them were used at PARC for the next decade.  By 1972 Lampson and Thacker were both itching for a new project.

Thacker and crew started the skunkworks project on November 22, 1972 and by April of 1973 the first Interim Dynabook (aka Alto) was up and running and displaying graphics:

The Alto featured a bitmapped display of 606×808 pixels with the approximate dimensions of an 8.5”x11” sheet of paper, 64KW (in 16-bit words) of semiconductor memory, a microcode clock rate of 170ns (approximately 6Mhz) and local storage of 2.5MB on a removable pack.  In 1974 the design and implementation of Ethernet networking was completed, and became standard Alto hardware.  All of this was implemented in a couple hundred ICs and fit under a desk.  Over the next 10 years, approximately 2,000 Altos were manufactured for use within PARC and at research labs and universities around the world.

The Alto was designed as a research vessel for efforts within PARC, and in that regard it was an astounding success.  Over the next decade, the Alto was involved in experiments in:

Most famously, the Alto (running Smalltalk) served as the inspiration for the modern Graphical User Interface.  As the story goes, in 1979 teams from both Apple and Microsoft saw what PARC had been working on and were inspired, integrating aspects of what they saw into the Macintosh and Windows, respectively.

Smalltalk was important in early computer education and HCI studies and lives on to this day in the Squeak programming language.

The Mesa programming language originated on the Alto and was instrumental in the development of the Xerox Star desktop environment.

The Bravo word processor introduced WYSIWYG editing to the world and is in many respects the great-grandfather of Microsoft Word – Bravo’s author Charles Simonyi took what he’d learned from Bravo with him to Microsoft when he left PARC in the early 1980s.

The Ethernet networking research done with the Alto at PARC lead to the definition of Ethernet as an industry standard and was a major influence on the design of TCP/IP and associated networking protocols.

The Alto’s success was due in no small part to its clever, minimalist hardware design.  This design made the Alto extremely flexible and easily adaptable to whatever crazy idea or experiment that needed to be investigated.

In the forthcoming articles in this series, I will go into detail about the Alto’s hardware and demonstrate how the Alto achieved this flexibility.

Okay, if the Apple 1 computer does not have screen addressing, how am I doing SPIROGRAPH? 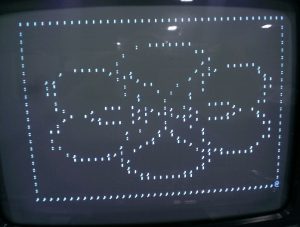 First I made an array of 240 integers.  It would have been nice to make an array of 40 x 48 integers, but there isn’t enough memory, and two dimensional arrays are not supported.  So I had to fit two vertical dots and 4 horizontal dots into one integer.  Then, using shift-by-divide and the MOD function, I could calculate what I wanted on the screen, and finally print it all out at once.  However, I didn’t print out the last character, as that would have scrolled the screen.

Spirograph is round, so the 48 lines vertically are not needed.  And, this is important, because the program actually loads, but does not run — getting an out-of-memory error.  Deleting some of the many REMarks frees up enough space to run. 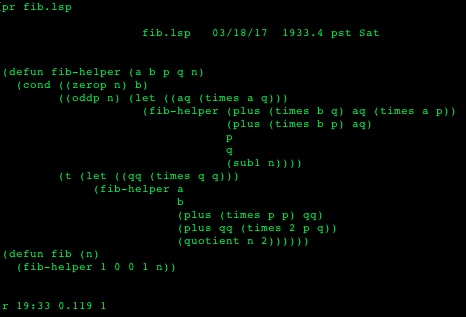