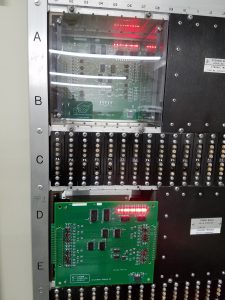 The first 5 final candidate Memory module boards came in from FAB and Assembly yesterday morning, and they look pretty good! I reclaimed and installed more pulse transformers, bolted it onto the Lexan chassis I finished over the weekend, and plugged it in.

Hmm, I must have done something seriously wrong, because it seems to work! The top one, playing the part of PP0, is the new one, and the lower one, playing the part of PP1, is the prototype. The prototype has to be on extenders, because the connector spacing isn’t quite right. I seem to have gotten that corrected in the new version. You may be able to notice that the old one has the old logo in the lower left, whereas the new one has the new logo.

So, what did I do differently you may ask? Besides fixing the connector spacing, I added a whole bunch of test points, had them install the correct 0805 LED’s, as opposed to the 1206’s I put on the prototype, and reduced the LED current by a factor of 3 so I don’t get sunburned quite so easily.

I suspect there will be more assembly in my future.